THE POINT OF POLKA DOTS: RISORGIMENTO SQUARE IN BARI

For some time now the idea of writing somethingabout a pois architecture has been tormenting me. In recent seasons in fact polka dot “fabrics” have led to much, especially in the open air. They have exceeded, in the “fantasies” of designers, the more serious checkered, striped and chalk-striped patterns that had inspired much of the most interesting research between the 80s and 90s.

As much as they conjure images of frivolity unattained by other geometries, these polka dots reveal unsuspected abilities of adaptation to various urban occasions and, as in the beautiful Ma0 project, an aptitude to negotiate the needs of experimentation with the resistances of public spaces, the individual specific nature of the project with the generic nature of the collective imagination.

The Roman group accepts, without any special anxiety of self-affirmation, the axial setting of this Bari space, with the fountain arranged centrally before the facade of the Garibaldi school and organises a few pieces symmetrically (trees, illumination, benches) into two opposing arrays, as in a game of checkers on a triangular gaming board.

The strategy of linking one side of the benches to a hinged fixed to the ground, leaving the possibility of rotating them and assuming different positions, interrupts the symmetry, transforming the geometry into a sensitive instrument, able to follow inter-actively various encounters, individual desires, the changeable caprices of climate, darkness, light, shadow and all the degrees of possibility between one condition and another.

Bringing the circle back to its original design (the bench rotates like a compass) and multiplying it by flanking it in the simplest fashion with the Ma0 project produces an excellent, reversible fabric: suitable for occasions with a more solemn and ceremonial “dress code” just as for a friendlier daily use. 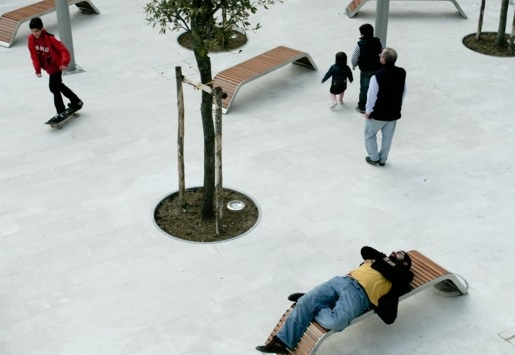